Divine Maha Shivratri- All you need to know

Bhagwan Shiva is known as the ascetic god, yet Mahashivratri is celebrated to seek blessings for a happy and prosperous conjugal life. He was a minimalist, yet his worshippers request and love him for the generous boons he showers. He is known for his wisdom but funnily enough, regarded as the innocent god (Bholenath)- such is the glory of God Shiva.

The beautiful crescent moon adornment, the third eye on his forehead, Vasuki snake around his neck, holy Ganga river flowing from his matted hair, the Trishul as his weapon and the Damaru which is his musical instrument. The tranquil looking Lord Shiva is one of the most revered God of Hindu religion. Shiva is a Sanskrit word which means ‘The Auspicious One’, he is also known as Mahadev (The Great God). 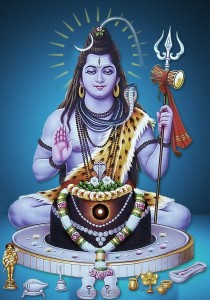 When creation had been completed, Shiva and Parvati went out to live on the top of Mount Kailas. Parvati asked, “O venerable Lord! which of the many rituals observed in Thy honour doth please Thee most?”

The Lord replied, “The 14th night of the new moon, in the dark fortnight during the month of Phalgun, is my most favourite day. It is known as Shivaratri. My devotees give me greater happiness by mere fasting than by ceremonial baths and offerings of flowers, sweets and incense.

“The devotee observes strict spiritual discipline in the day and worships Me in four different forms during each of the four successive three-hour periods of the night. The offering of a few bael leaves is more precious to Me than the precious jewels and flowers. My devotee should bathe Me in milk at the first period, in curd at the second, in clarified butter at the third, and in honey at the fourth and last. Next morning, he should feed the Brahmins first and, after performing the prescribed ceremonies, he can break his fast. O Parvati! there is no ritual which can compare with this simple routine in sanctity.”

Parvati was deeply impressed by the speech of Lord Shiva. She repeated it to Her friends who in their turn passed it on to the ruling princes on earth. Thus was the sanctity of Shivaratri broadcast all over the world.

When Shivratri is celebrated?

Maha Shivratri  is celebrated in honor of Lord Shiva on the 13th(or 14th) night of the Krishna paksha (dark half or waning phase) of the moon (night before Amavasya) in the month of Phalgun (Feb-March) by almost all sects within Hinduism. It is a day of fasting for all devotees of Lord Shiva and is one of the eight most significant days of fasting in the Hindu Calendar.

How Shivratri is celebrated?

As Lord Shiva is considered to be the lord of meditation and penance, devotees may be best served by engaging in introspection and self-evaluation of their spiritual progress on Maha Shivratri. Hence, this day may be considered as an opportunity to engage in awakening one’s inner spirit towards (self)-realization of the supreme. It is perhaps for this reason that the scriptures encourage us to rem

ain awake throughout the night on Shivratri – to welcome the new moon and its spiritual energy into our lives.

Devotees worship Lord Shiva to get a release from the cycle of death and rebirth. Vigils are maintained throughout the night at Shiva temples. Fasts are also observed by the devotees, prayers are offered at the temple and devotional songs are chanted. Many people also consume bhaang which is a substance procured from cannabis.

The two mantras that are perhaps most relevant to invoking the power and energy associated with Lord Shiva are:

The phallus symbol representing Shiva is called the lingam. It is usually made of granite, soapstone, quartz, marble or metal, and has a ‘yoni’ or vagina as its base representing the union of organs. Devotees circuma

mbulate the lingam and worship it throughout the night. It is bathed every three hours with the 5 sacred offerings of a cow, called the ‘panchagavya’ – milk, sour milk, urine, butter and dung. Then the 5 foods of immortality – milk, clarified butter, curd, honey and sugar are placed before the lingam.

Having observed the requirements of the all night fast, devotees break their fast with the ‘prasad’ offered to Lord Shiva.

Message of Shivratri in modern time

The avatar of the Supreme soul, Shiva, in this vicious world to bring us out of darkness of ignorance, so called RATRI, is celebrated as Shivaratri all over the world. Lord Shiva imparts the precious knowledge to us (his child, the souls) through his chariot, the Brahma. Souls adopting the knowledge get rid of KAMA, KRODH, LOBH, MOH & AHANKAR and become the true humans. Lets celebrate the true Shivaratri, by having control over the vices, and be a partner in making of the new world, the world of true happiness, love & peace.

Badge of Honour for GHS

We are pleased to inform you that our blog has been selected as one of the TOP 20 HINDU blogs on the web by Feedspot.
We have received a badge of honour, which will be placed on our website. If you haven't been on the website and reading interesting blogs, Please visit now...

There are no upcoming events at this time.